Richard Casey (Rick) Sadler, PhD, MPH, is an assistant professor in the Department of Family Medicine who engages in public health research through the CHM’s Division of Public Health in Flint. He earned a BSc in Environmental Science and Planning from the University of Michigan-Flint and a PhD in Geography from the University of Western Ontario.  A geographer through and through, he was initially a ‘fish out of water’ in public health.  But since joining MSU in 2015, he has expanded his expertise, working with a range of research and community partners and completing his Master’s in Public Health from Johns Hopkins University (where he attended as a Bloomberg Fellow).

Dr. Sadler’s research is aimed at strengthening the understanding between the built environment and health behaviors/outcomes, with the goal of shaping land use policy to build healthier cities. His work is integrated with community organizations, and leans heavily on geographic information systems to identify and address disparities in the social determinants of health. He says, “My experiences growing up in the Flint region—where industrial growth, subsequent deindustrialization, and fragmented planning practices have had a profound influence on the built form—shaped my drive to resolve inequalities that arise from imbalances between the salutogenic and pathogenic properties of urban areas.”

He adds, “My work is underpinned by an upbringing oriented around compassion and stewardship, experiential training in cultural competence, and a recognition of historical processes of discrimination which have exacerbated spatial and health inequalities.”

Search PubMed at the National Library of Medicine: 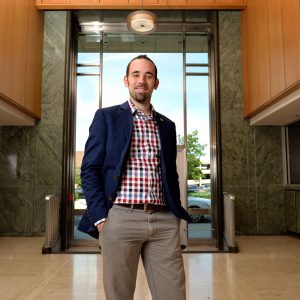